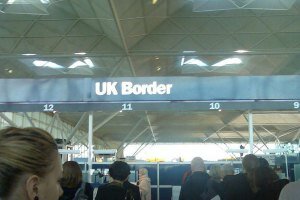 More than 2,000 illegal migrants living in London have been asked to return home as part of the UK Border Agency’s five-month old campaign - Operation Mayapple - to tackle visa abuse. A third of these (nearly 700) were from India.

In May 2012, the UK border control agency launched Operation Mayapple to crack down on students and other migrants staying in the UK longer than permitted.

Of the 2,000 London cases, roughly a third were from India, according to the Home Office.

Significant numbers of illegal migrants from Pakistan, Nigeria, China, Bangladesh and Brazil have also returned home as a result of the campaign.

More than 400 London “overstayers” were persuaded to leave the country after being contacted to inform them that they have no right to remain and must make arrangements to leave.

A further 800 left of their own accord and 58 overstayers left the capital under the Assisted Voluntary Return scheme, which is operated by Refugee Action.

The e-Borders system means that UKBA can now check which people have left the country and this information, along with other intelligence, is then used to contact those who breach the terms of their visas, the Home Office added.

“We are working to ensure we identify anybody who has overstayed their visa and encourage them to leave the country voluntarily,” said Damian Green, Immigration Minister. “Those tempted to overstay should be aware of the serious consequences. If you choose not to go you will be arrested, detained and removed.”

Anyone who fails to leave before their visa expires faces a ban on re-entry to the UK.

The news comes just a day after it emerged that Britain’s largest supermarket chain Tesco could face a potential fine of £200,000 for employing 20 workers on student visas. These workers, which include Indian students, were putting in 50-70 hours of work every week when their visas allowed only 20 hours of work time every week.

Green met with the local immigration team for Bexley, Greenwich, Lambeth and Southwark ahead of a series of raids on Walworth Road and Atlantic Road in South London, during which three immigration offenders were detained.

The national statistics for removals will be published as part of Home Office Quarterly Immigration Statistics on  August 30.